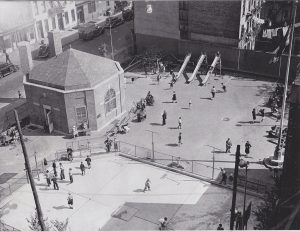 Click to enlarge photo. Photo of Sauer Park, late 1930’s based on the cars parked on the street (the playground park opened on July 15, 1934). Sauer Park is on the east side of the garden.

Joseph C. Sauer Park
E. 12 St. between Ave. A and Ave. B
Manhattan
Acres: 0.433
Community Board: 3, Council District: 2, Park ID: M113
This text is part of Parks’ Historical Signs Project and can be found posted within the park.

Sauer Park
World War I soldier Joseph C. Sauer (1896-1918) was born in Pittsburgh, Pennsylvania. His family moved to the Lower East Side of New York City when he was an infant. Sauer graduated from the Redemptorist Parochial School and excelled in athletics, especially track. He worked for the Western Electric Company, and following the death of his grandfather, Sauer and his mother took over the family’s basket manufacturing business. He worked there until he entered the United States Army on September 28, 1917.
At Camp Upton on Long Island, Sauer was appointed a bugler and assigned to Company F, 308th Infantry, 77th Division. On April 6, 1918, Sauer sailed for France where he fought on the Vesle, the St. Mihiel, and the Meuse Argonne. On October 7 a section of his company was cut off in the Forest of the Argonne. One of the volunteers who crawled through the forest to reach the rest of the company, Sauer was shot in both legs by German soldiers, and died of his wounds several days later. For his act of bravery, he was awarded the Distinguished Service Cross.
Sauer Park is one of nine playgrounds that were built by the Parks Department through the War Memorial Fund, and were opened simultaneously on July 15, 1934. The War Memorial Fund was established in 1921 with $250,000 collected by the Police Department, and by 1934 the fund—never spent—had grown in value to $350,000. Seeking additional open spaces for children, Parks Commissioner Robert Moses obtained a legal ruling which permitted use of the fund for playground development. The properties were intended to honor the memories of individual soldiers who gave their lives in combat.
The Fund was transferred to Parks on March 19, 1934. With additional funding from the Federal Temporary Emergency Relief Administration, nine playgrounds were constructed within four months. Each site was equipped with a play area, wading pool, brick field house and comfort station, flagpole, and commemorative tablet. Mayor Fiorello H. LaGuardia and Parks Commissioner Moses simultaneously dedicated the memorial playgrounds in a ceremony held at William E. Sheridan Playground in Brooklyn. The program was broadcast to all the other playgrounds by means of an elaborate public address system.
Parks first acquired the land for Sauer Park in 1934 and expanded the site with subsequent additions in 1965, 1989, and 1992. The property underwent a dramatic renovation as a result of collaboration between the community and Parks. In the late 1980s fencing was installed around the park, and members of the East 12th Street Block Association prepared plans, raised funds, and initiated improvements, such as planting garden plots.
Once the design was completed in 1991, the reconstruction was funded by Manhattan Borough President Ruth W. Messinger. Construction took place in 1992-93, and the playground reopened on August 21, 1993. New features include a spray shower, pavilions, and modular play equipment with corkscrew slides. In 1994 community members planted a children’s garden on the east side of the park, and a local artist collaborated with children on a mural of local flora and fauna. The East 12th Street Block Association, Friends of Sauer Park, and El Sol Brillante Garden Sr. have agreed to maintain the park’s beautiful green spaces.