Links via the OASIS Map: 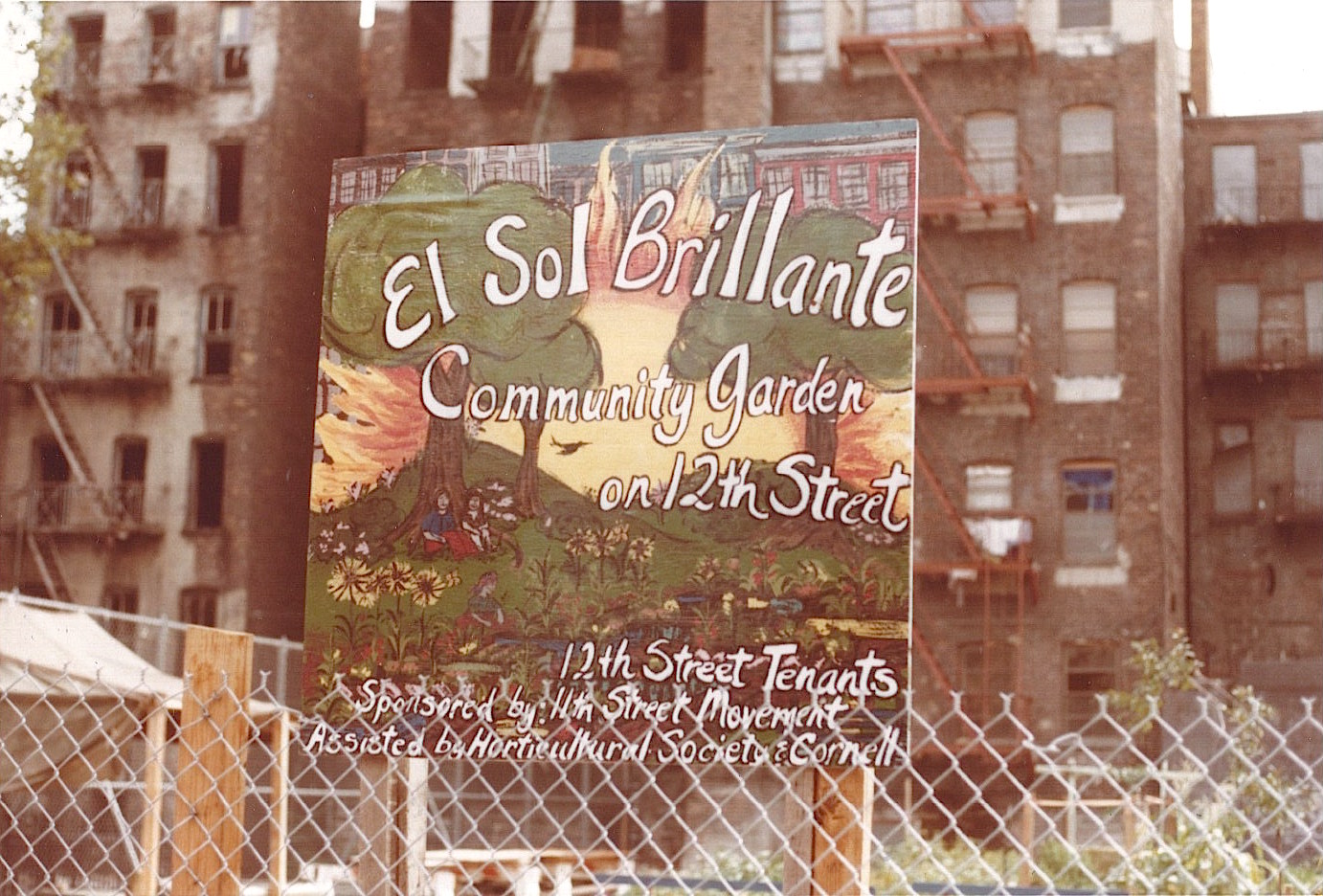 Details about the photo

From the book, "Land-Saving Action: A Written Symposium by 29 Experts on Private Land Conservation in the 1980s"

p.50  "The El Sol Brillante case study(2) provides an interesting and complex view of community organizing on Manhattan's Lower East Side. A large community garden was developed on 12th Street to complement a housing rehabilitation project on 11th Street. The relationship between the two neighborhood groups involved was formalized by the incorporation of a separate land trust for the garden. The land trust's success in acquiring and developing four city lots as garden has encouraged it to expand its revitalization efforts."

"El Sol Brillante Community Garden is located on the Lower East Side of Manhattan, an area which from the early nineteenth century has never lost its identity as a major port of entry for poorer immigrants to America. There have been succeeding waves of Irish, German, Italian, Jewish, and Chinese immigrants; and the neighborhood today [early 1980's] has become predominantly Hispanic, with some remnants of Russian, Ukranian, and Italian communities still living within the area. The neighborhood's residents remain overwhelmingly low income, and the housing stock consists primarily of very old tenements available for relatively inexpensive rents. The past few years have seen the onset of private owner disinvestment on the Lower East Side, with consequent deterioration, abandonment, city foreclosures for nonpayment of property taxes, vandalism, fires, and demolition of vacant buildings—creating many vacant lots.

"In the fall of 1976, four buildings were demolished on East 12th Street. To replace the cleared lots, people from the 11th Street Movement, a group involved with housing on 11th Street, began organizing for the development of a community garden. The 11th Street Movement people were first involved in an "urban homesteading demonstration project" to rehabilitate a multifamily dwelling on East 11th Street behind the 12th Street lot, using a "sweat equity" development approach. Later, the group's efforts focused on solar heating and installing a wind generator for the building. As part of its 11th Street open space plan, a pocket park was constructed adjacent to the building on East 11th Street. The same year it initiated the 12th Street garden project, which became known as El Sol Brillante (The Bright Sun) Community Garden.

"Assistance in organizing the project was requested from local 12th Street residents, an 11th Street architect, the Horticultural Society of New York (gardening advice), the Cornell Cooperative Extension Service (gardening advice), and the CETA Summer Youth Corps (labor on the site and jobs for local kids).

"The 11th Street Movement members were primarily interested in neighborhood revitalization and community organizing. The initiation of the garden was intended by the group both to improve the quality of the environment and to provide an opportunity to organize people and identify local leadership. There were approximately forty people in the 12th Street group organized that summer to begin developing the El Sol Brillante garden. That group consisted of low-income Hispanic and white residents who had lived in the neighborhood for many years.

"Early design plans were prepared by the architect member of the 11th Street Movement, but the residents involved stated that most real decisions were made by negotiations with one another on the site itself. The initial design is almost totally preserved today [early 1980's], although a few elements have been rearranged. The garden is continually upgraded: wooden beds replaced by concrete, paths paved, and so forth.

"Very little money was spent in developing this site. In a participant's own words, "a little went a long way." Members scrounged materials and depended to a large extent on local technical assistance organizations for providing what the group couldn't gather on its own.

"In the fall of 1978, the 11th Street Movement and the El Sol Brillante Community Garden group together requested the assistance of The Trust for Public Land in attempting to acquire the four lots composing the garden site. Following The Trust for Public Land's suggestion, the group incorporated so that it could cooperatively own the property as a nonprofit land trust.

"At about the same time research was begun by TPL to identify the owners of the lots. It was discovered that two lots were owned by the city while the other two were in the process of being foreclosed by the city for nonpayment of property taxes. Eventually, after a long series of complications and much research, a decision was made to prepare a "restricted auction package" in an effort to purchase the lots inexpensively for the group. In this process land is sold at public auction with a restriction placed on its eventual use. In this case, the property was to be used only by a nonprofit community organization for a garden, park, or other open space activity. Such a restriction usually keeps the price at a reasonable level.

"The process of acquiring the land was completed in March 1980, and now the battle by the El Sol group and TPL for property tax exemption (or reassessment) has begun. A total of $2,500 was needed for the purchase of the land, and an additional $1,000 was required to cover legal expenses.

"What was once a rubble-filled lot is now a thriving vegetable garden with approximately forty raised beds. There is also a covered sitting area (where dominoes are often played), and a cluster of benches for chatting is in the middle of the site. Painted on the back wall, a mural of a sunset overlooking a vegetable farm immediately catches the eye. Everyone in the neighborhood is welcome to use the garden as a social place when someone from the group is there, which is most of the time. A gate, fence, and lock control access when no one is in the garden.

"The El Sol Brillante gardening group plans to continue improving the site while maintaining its present character. The group has now converted a vacant lot across from this site into another garden for use by area residents and is contemplating the renovation of a dilapidated city park adjacent to the garden."

"Notes: 1. This case study is based on material published in The Making of Neighborhood Open Spaces, by L. Cashdan, M. Francis, and L. Paxson (New York: City University of New York, Center for Human Environments, 1981).